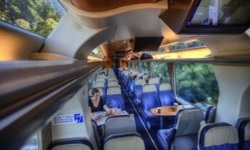 We were very privileged to be involved in the creation of the new Trans-alpine and Trans-coastal trains built at Hillside. Unlike the previous carriages, which were refits of old carriages made in the 60's, bought from the UK, they were built entirely in NZ. An enormous jig was made to test the chassis' all built by the team at Hillside, which showed there was very capable enterprise down there and around the country. FDL produced numerous components for the fit out including; window surrounds, display consoles, toilet cubicles, exit doors and HVAC ducts to name a few. Some 14 carriages were built and are now successfully travelling up and down the country.