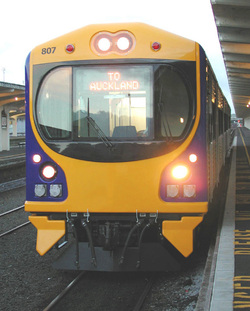 The Fibreglass Developments team has been involved in the design and manufacture of fibreglass components for the new Britomart Trains in Auckland.

With the opening of Auckland's Britomart passenger terminal in July, it was decided to treat the newer (ADL/ADC class) trains to an aesthetic makeover.

The exteriors were originally to be left untouched with the main focus on cleaning up the interior.  But the designers were insistent the exteriors needed something else.  And that something else became a nose cone.

Safety was an important issue - Fire retard resin was used in the fibreglass components, four steel posts and a plate steel bar were put in place across the front to act as driver protection in the event of an accident.  New bright blue and yellow colours, along with ditch lights, were incorporated as another safety feature making the trains easily visible at crossings.

Finally, with an ‘unfinished look' to the bottom of the older style trains, a bright yellow cowcatcher was introduced.

FDL's role was to produce the following fibreglass components - nose cones (the front of the trains), cowcatchers (the two triangle shaped objects at the bottom of the nose cone), and all fibreglass carriage interiors including walls, ceilings, seat backs and bases.

FDL's design and technology team found it necessary to adapt specifications, with good old kiwi ingenuity, working with designers, and contributing to the adaptations to meet some of the challenges faced by adjusting moulded units for tolerances to accommodate variations in the train's original construction.

One particular challenge was to allow size tolerance into the carriage walls and ceilings.  As not all of the carriages were identical sizes inside - there could have been several centimetres difference between carriages.  The fibreglass interiors had to be able to cope with that, while still achieving a clean finish.

The Britomart trains are all currently in use in Auckland.