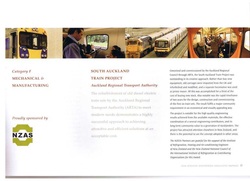 Conceived and commissioned for the Auckland Regional Council by the Auckland Regional Transport Authority (ARTA), the South Auckland train project was outstanding in its creative approach. Rather than buy new equipment, old carriages were imported from the UK and refurbished and modified and a separate locomotive was used as prime mover. All this was accomplished for a third of the price of buying new stock. Also notable was the rapid time frame of two years for the design, construction and commissioning of the first six train sets. The result fulfills a major requirement in an economical & visually appealing way.


The project is notable for the high quality engineering results achieved from the available materials, the effective coordination of several engineering contributors and its long term community value to a generation of Aucklanders. The project has attracted attention elsewhere in New Zealand and there is the potential to see the concept adopted in other areas.