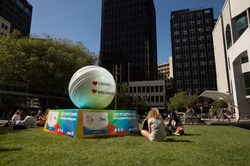 FDL was recently commissioned by Anderson Design to produce 7 x 1.8 metre diameter cricket balls for the launch of the ICC Cricket World Cup. The balls are a perfect copy of a brand new (un-tampered with) ball, which was scanned, scaled then machined in house on a five-axis CNC by X-Form design.

The bases which measure 2.6 sq metres were added to the contract at late notice, adding extra pressure as the time frame for delivery had to be reduced like a 20 over match. UV curing was also required and had to be completed before the launch date of February 20th 2014. The balls were liveried at Anderson Design then despatched around the country for launch date. The balls with the countdown to the start of the ICC Cricket World Cup can be found in Auckland, Hamilton, Napier, Wellington, Nelson, Christchurch and Dunedin.